With a Bible in his Hand 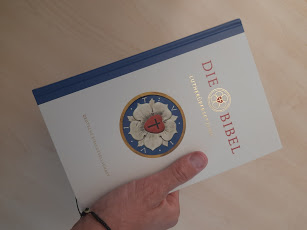 I held this sermon during an ecumenical prayer meeting in the framework of #DialoguePerspectives, on Sunday June 21st 2020.

These words went around the world.

George Floyd died on May 25th in Minneapolis, Minnesota. He was 46-year-old and a black African American. He was killed in a violent police arrest. One police officer had pressed his knee on neck and throat of George Floyd for more than eight minutes. George Floyed screamed: I can´t breathe!

But the police officer did not release the pressure. Instead, he kept on pressing his knee into the man´s throat. Eight mintes later George Floyd was dead.
A video of the incident caused an outcry worldwide. The rest is history: Demonstations and protests started world wide online and offline, always connected to the hashtag onTwitter #blacklivesmatter.

President Trump presented himself as „law-and-order-Chief-of-State“ who brutally puts demonstrations and the so called riots to an end instead of condoling to families and friends of George Floyd, or comdemning police violence. And he posed in front of St. John´s Cathedral opposite to the White House with a Bible in his hands.

Rev. Mariann Edgar Budde, Bishop of the Episcopal Diocese of Washington DC, gave a clear response to the President on CNN News on June 1st 2020:

“Let me be clear. The President just used a Bible, the most sacred text of the Judeo-Christian tradition, and one of the churches of my diocese without permission as a backdrop for a message antithetical to the teachings of Jesus and everything that our churches stand for. To do so, he sanctioned the use of tear gas by police officers in riot gear to clear the church yard.

I am outraged. The President did not pray when he came to St. John’s; nor did he acknowledge the agony of our country right now and in particular the people of color who rightfully demand an end to 400 years of systemic racism and white supremacy in our country.“

We in the Diocese of Washington following Jesus distance ourselves, and in no way do we support the President’s response to a wounded, grieving nation. What we are watching now is the shredding of our national fabric.”

Donald Trump is a poser. He stood in front of St. John´s Cathedral in Washington DC with a Bible in his hand. Soldiers had to violently clear the street from demonstrators so that President Trump could cross the street from the White House just to pose. His only message: Look all of you, I defend God´s own country with Bible and sword. I am your law and order President. Our predecessors, the pilgrim fathers from Europe, have conquered this land from the non-Christians, the native people of America. I will defend this land against all who do not accept white male dominance, against all who do not accept right winged evangelical and fundamentalist Christianity.

What I say to this so called „defense of Christianity“:

Trump abused the Bible because he just posed with it. Trump abuses Christianity over and over again, because he does not care about respect, empathy and compassion, the core values of Christianity.
He did not talk about racism, he did not talk about police violence against black people like George Floyd. He did not talk about the loss of human lives due to hate crimes against black people, against people of colour, against trans* and queer people, and against other minorities. He did not say: I am sorry for the loss, the grieving, the horrible police actions, that took away the lives of thousands of people so far.

According to Christianity there is a clear understanding about what to do with the Bible: You need to read it. Ever since Martin Luther, Melanchthon, Zwingli, Calvin and other reformers the Bible has been translated into all the different languages so that people themselves could read it, and relate it to their daily lives.

Read the Bible, read it! That is the best thing you can do with the Bible. Much would have been gained for Donald Trump if he had simply opened the Bible and read it. What a different kind of sign that would have been: A president who, under the burden of his responsibility, is studying Holy Scripture in a real search for orientation. Without show, without aggressive and disrespectul behavior, without the eviction of demonstrators. He would have possibly come across the biblical saying:

„It should not be done by army or strength, but by my spirit, says the Lord Zebaoth.“ (Zechariah 4: 6)

It was the biblical verse for the week of Pentecost when the killing of George Floyd took place. Trump would possibly have understood that his action was neither biblical nor Christian nor human at all. It was just disgusting, heartless, and full of ignorance.

And what I add from a Christian perspective:

Whoever reads the bible should know that everybody – regardless of her gender identity, colour of skin and origin, regardless of his mother tongue, age, handicaps, and sexual orientation – is made in the image of God, and thus owns a unique dignity.
Whoever reads the Bible should know that the God of biblical stories supports widows and strangers, and stands side by side with outcasts and other minority people.
For that´s what God did in the Old Testament. He led the people of Israel out of slavery in Egypt. He freed the exiled people of Israel out of Babylon and guided them back to Jerusalem. He commanded his people to protect elderly people, widows, orphans, strangers, sick and poor.

And that´s what also Jesus did: He put the outcasts and forgotten right into the centre of the biblical message. They were the receivers of God´s love and mercy not the people in authority and power.

Michael Bruce Curry is the presiding Bishop of the Episcopal Church in the USA. He is 67 years old and black. He was the preacher who held the sermon during Prince Harry´s and Meghan Martle´s wedding service in London in May 2018. He became famous with that sermon.
On the 31 of May, directly after Trump´s posing in front of St. Johns´s Church, he said to the Washington Post:

When I think about what love looks like, I see us channeling our holy rage into concrete, productive and powerful action. In this moment, love looks like voting for leadership at the local, state, and federal level that will help us to make lasting reform.
Love looks like calling on officials and demanding they fulfill their duty to protect the dignity of every child of God.
Love looks like making the long-term commitment to racial healing, justice and truth-telling — knowing that, without intentional, ongoing intervention on the part of every person of good will, America – and I add: every nation world wide – will cling to its original, racist ways of being.
Love looks like working with local police departments to build relationships with the community and develop mechanisms that hold officers accountable.

Love looks like all of us — people of every colour and religion and national origin and political affiliation — standing up and saying “Enough! We can do better than this. We can be better than this!

What does love look like? I believe that is what Jesus of Nazareth taught us:
It looks like the Biblical Good Samaritan, an outsider who spends his time ad money healing somebody he doesn’t know or even like.
What America has seen in the past several days may leave us wondering what we can possibly do in this moment to be good Samaritans — to help heal our country, even the parts we don’t know or like. But we have the answer. Now is the time for a national renewal of the ideals of human equality, liberty, and justice for all.
Now is the time to commit to cherishing and respecting all lives, and to honoring the dignity and infinite worth of every child of God. Now is the time for all of us to show — in our words, our actions, and our lives — what love really looks like.“